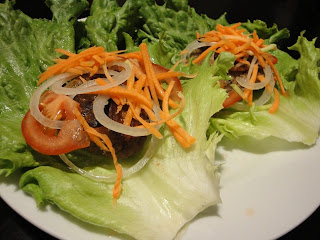 On the paleo diet, us cavepeople tend to eat alot of salads and veggies. We find it easier to maintain continued consumption when there's varying textures and  meat present! So, I try to find different ways to deliver the salad so we don't feel the salad slump.

This past week I made slider lettuce wraps as a salad departure. My husband raved about them! I used fresh green leaf lettuce, raw thinly sliced onion, tomatoes, and grated carrot. Each wrap contained around 1/6lb slider. Yummm!! This hand salad definitely doesn't disappoint.

You can use this same method for all kinds of sandwich  bread and tortilla-based dishes. I've found statistics that state Americans eat 45 billion sandwiches a year, or almost 200 each. Imagine what we'd do for ourselves if we ate just a few less sandwiches a week? I'll eventually talk about the advantage avoiding processed carbs in the form of grains and pastas, so stay tuned!
Posted by Kellie at 5:21 PM No comments:

I could eat breakfast for dinner every day! I grew up eating eggs in every form and it's a good thing I did because my husband despised eggs when I met him. I was able to show him the way. They are so versatile and easy to cook. Even the most ill-equipped chef can scramble some eggs!

Unlike in many Asian cultures, the typical American breakfast does not usually include vegetables. If they are present, they are usually wrapped up in a cheesy omelet. That simply won't do! I believe that we need to incorporate as many healthful foods into our breakfast as possible. It sets the stage for the whole day -- both mentally and nutritionally.

Last night I fried up some bacon and scrambled four duck eggs and two chicken eggs for the two of us. We also lightly sauteed bok choy, green peppers, red onions, cabbage, carrot, and garlic in the delicious bacon grease. This completed our breakfast dinner!
Posted by Kellie at 6:25 PM No comments: 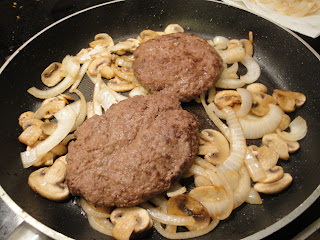 After a hard workout, my husband and I usually make a green smoothie with egg white protein powder (we avoid the whey-based powders). However, we love a good hearty, meaty dinner after as well.

Several nights ago we cooked up a couple burger patties with a load of onions and mushrooms. Then we wrapped them up in green leaf lettuce with some shredded carrot. Truly delicious!! I don't even miss the bun.

Sometimes we'll make a hamburger salad where we just sautee up some ground beef and throw thinly sliced red onion and any other veggies we have around. It's always easier for me to eat salads when they have meat on them! I don't think I'm alone in that.
Posted by Kellie at 10:00 AM No comments:

Those Cavedudes Had it Right

The Paleo Diet encourages the consumption of foods found in nature, unmodified and unprocessed as much as possible. So, for the typical American diet full of grains, pastas, dairy, etc...it doesn't quite fit.

I can vouch for the fact that including grains and dairy in your diet can cause extra pounds. I've transitioned to more strict paleo way of eating and in 10 days I've lost 7.4 lbs. This seems like an unhealthy amount, but some of it is water weight. I'm eating more than my fill of lean meats, veggies, and fruits. It is the closest to the natural, original diet of our ancestors.

Sure, perhaps cavemen did not live very long, but that's more because they were stabbed by a mammoth or suffered an infection after taking a fall. No cavemen had diabetes. No cavemen had heart disease or high blood pressure. These are diseases of affluence post-agriculture. Sure, these foods helped us be prolific, but they also produced life-threatening diseases.

My challenge to those that are dubious about this is to eat this way for 2-4 weeks. I feel so much more energetic and clear headed than when I am eating foods other than meat, fruits, and veg. The weight loss side effect is also amazing! Some say that it also improves acne, allergies, and can help diabetics no longer require insulin.

I believe our health is the most important aspect of our life. We sure are living longer than ever, but how healthy are we at the end?? We need to remain healthy and active to ensure a high quality of life after our 50s and 60s.
Posted by Kellie at 9:27 AM No comments:

Muahahahaha....*ahem* sorry, I got a bit too excited about the various foul eggs I now have in my possession. I am lucky to have a variety of Asian markets in my area, so I came across duck and quail eggs in my shopping this week. It is unusual for the average American to have anything other than a chicken egg in their fridge, so our excitement isn't completely unfounded!

In our normal fashion when purchasing unfamiliar food, we google'd it.

Quail Eggs
Generally considered a delicacy. Some street vendors abroad top hamburgers/sandwiches with a hard boiled quail eggs. I've seen them fried on top of dishes at fancy restaurants, too.

You can cook hardboil them in 3 minutes. They have a light flavor similar to chicken eggs.

Duck Eggs
Larger than chicken eggs in both yolk and overall size. The egg whites also contain more protein so it is easier to overcook and produce tougher eggs. If you love yolks, you'll love duck eggs!

You can use duck eggs in place of chicken eggs in any recipe. In fact, they actually produce fluffier baked goods and firmer egg dishes (as I experienced with this week's quiche). They have a slightly different taste to regular eggs and a different yolk texture.

Eggs of all varieties are a great food to eat for the average paleolithic eater. Even if you aren't subscribed to that way of eating, that's ok! Eggs, especially Omega 3 eggs, are a great source of protein/amino acids and good cholesterol. It's also better to get farm fresh eggs, which I am in the process of acquiring!
Posted by Kellie at 2:50 PM No comments:

I absolutely love the spiciness and full flavor of Indian food. One of my favorites is Chicken Tikka Masala. Creamy tomato sauce and tender chicken....how can you not love it? I recently learned that it is considered the most popular restaurant dish in the UK! I was completely unawares of the origin.

"A survey in the United Kingdom claimed that it is that country's most popular restaurant dish.[3] One in seven curries sold in the UK is chicken tikka masala. The cross-cultural popularity of the dish in the UK led former Foreign Secretary Robin Cook to proclaim it as "a true British national dish".[4]

In the past few years I've been exposed to Indian (and apparently British) food, both home made and at the buffet. So many dishes use ingredients in ways that aren't common here, so it piqued my interest. I absolutely love experiencing new cuisine.

My husband and I have been tooling around with paleo versions of Indian dishes. In this one I've taken multiple different recipes and created a paleo amalgamation!

I marinaded chicken thighs for 1 hour, then placed them in the pressure cooker with the gravy ingredients. Cooked at pressure for 12 min, and allowed it sit for 10 before quick releasing the pressure.

I added coconut milk at the end to add a bit of creaminess!

Cauliflower "rice"
The spiciness of my dish required some rice-like companion. Cauliflower works really well! I even used the stem AND leaves. I'm not crazy, I promise. I added a bit of ghee and voila, it became a pretty darn good version for one of my favorite dishes!
Posted by Kellie at 5:10 PM No comments:

Since dairy isn't a mainstay in our diet, we ensure that we get enough calcium in other ways. Kale is a calcium-rich food, with 15% of our DV (according to the FDA) in one serving. I know, kale is a garnish right?? Wrong! Sure, it is difficult to eat raw, but not in a smoothie.
After an open meal at a friend's birthday brunch, I was full most of the day. So, instead of dinner I enjoyed a green smoothie:

Fruity Kale Smoothie
-cranberry water, 8oz (It is a mixture of 56oz water and 8oz unsweetened cranberry juice. Cranberries have a lot of benefits, so I use this sometimes.) or plain water
-banana
-2 large strawberries
-3+ leaves of kale

Put the ingredients in the order listed and let the blender rip! Don't be shy, let it run because kale is quite fibrous! When I feel in the mood for a sweeter smoothie, I'll use a bit of stevia. The taste of the kale is greatly muted and my husband and I love and now crave them.
Posted by Kellie at 11:45 PM No comments: 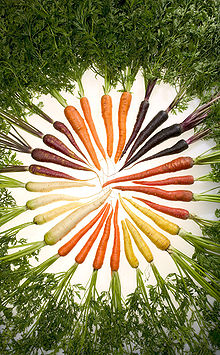 I enjoy eating fruits, vegetables, and meat - all that nature has to offer! I've never really been a picky eater and I've been blessed with an amazing, open-minded husband. We both decided to shift our diet to the Paleolithic WOE (way of eating) in 2008 as part of an ever-present quest to better oneself. I hesitate to call it a "diet" since it is meant to be a lifestyle change. Diets are so often a fad or completely unsustainable for the average person. Paleo is about eating the healthful foods which nature provides us, not highly processed, boxed "food" you find on the inside aisles of the grocery store.

If you aren't already aware, this WOE is based on our paleolithic ancestors' diet. This was before modern agriculture and the rise in eating grains and starchy foods like potatoes. This also includes dairy! I know how crazy this sounds... there are all kinds of "diets" out there, but no bread, pasta, OR cheese?! Uh, what? Don't worry, life sometimes is hard to plan for so open meals are "allowed" but I try to keep them infrequent! I personally have a very busy life, so I find this helps me stick with it even more by mentally allowing cheats and not being hard on myself. Plus, the dishes my husband and I make more than make up for the "loss" of those other foods. It also has an amazing weight normalizing effect, bringing your body to it's natural weight.

In the future I will be talking more about the Paleo WOE, why we do it, and how.

Our diet consists mostly of:
*Generally legumes are not considered Paleo since we have to cook most of them (among other reasons), but we have decided to include them in due to the cost savings and ease of use. Also, they're delicious.

We also came across Crossfit and the Primal Blueprint Fitness, so I'll be using this blog to track my food as well as my fitness!
Posted by Kellie at 11:05 PM No comments: